By now the entire galaxy knows that Kyrie Irving wants out of Cleveland. Since it leaked out to the news that Kyrie requested a trade in search of being more of a focal point for a team as well as get off the same team as Lebron, the main question being asked has been “Where does Kyrie fit best or where should Kyrie go?”

Although, in actuality the question at hand should be, “Who should the Cavs trade deal Kyrie to and in exchange for who?”

These days it is difficult to deal a talent like Kyrie and expect the same level of talent in return. You can offer multiple players for a player of his caliber although that does not necessarily mean you will get the same production. Kyrie was second in both points and assists for the Cavs that made the NBA Finals three years. He made the clutch shot everyone remembers that came after the Lebron block in 2016 to give the Cavs the Championship. He’s a 4x All-Star with an ASG MVP as well as an All-NBA player. To replace a player entering his prime with those credentials is almost impossible to do immediately. But there is a chance the Cavs can reach an agreement for a proven veteran, a young potential talent, and draft picks to bring in a down-the-line replacement for Kyrie. The only issue with that is the Cavs cannot afford to lose a superstar without gaining a superstar if they expect to even the score with Golden State. In fact, they won’t even be able to defeat the Boston Celtics if they trade Kyrie for less talent.

This offseason has been ultimately lackluster for the Cleveland Cavaliers. They have made a splash in the offseason equivalent to a single rain drop hitting the ocean. If they end up trading Kyrie this offseason, it will be their biggest move throughout. Multiple teams have reached out to the Cav’s front office inquiring and offering for Irving although obviously no offer  has been adequate enough for the Cavs to jump at.

Chris Broussard’s tweet that was deleted minutes after it was posted. Chris denies posting this himself.

There was recently a tweet via Chris Broussard that was deleted just minutes after it was posted stating the Cavs accepted a trade offer  from the Miami Heat to deal Irving for Goran Dragic, Justise Winslow, Bam Abedayo, and possibly a draft pick. That is the best possible trade the Cavs will be able to receive since Carmelo is no longer willing to waive his no-trade clause for the Cavs ironically due to this trade request by Irving. Dragic may be in his 30’s now although he is still a threat on the offensive end and can be a reliable spot up shooter for the Cavs with Lebron running the offense most of the time. Winslow is a young wing that could come off the bench and provide valuable minutes for the team especially on the defensive end. BamBam is a rookie that proved in college and the summer league he can be a real threat on the glass given his build at 6’10” and 250lbs and his act for following the ball once it’s in the air. Cavs could use help in all of those areas, especially rebounding. This trade may be less likely to happen as well after Dion Waiters made it known that he’s the current “alpha male” in Miami and Kyrie would have to live with it if the Cavs were to send him to South Beach. Irving and Waiters were once teammates in Cleveland from 2012 until 2015 when the Cavs chose to trade Waiters to the OKC Thunder. Their chemistry together was impoverished. 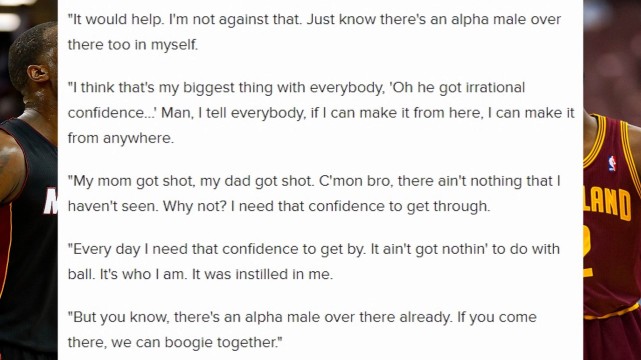 Dion Waiters when asked about Kyrie possibly being trade to Miami

The Phoenix Suns could have traded for Irving by now themselves but they are not willing to deal their 2017 lottery draft pick Josh Jackson to go along with Eric Bledsoe and a first round pick. Instead, the Suns rather part ways with Dragan Bender. Bender was the Suns 4th overall pick in the 2016 NBA Draft that ended up missing about half the season due to an ankle injury. Although, when he was available to play he averaged 3.4 ppg and 2.4rpg in just 13mpg. With only 43 games of experience at the age of 19 Bender has a ton of time to develop. His stats may not be great although when he was on the court he was able to show flashes of his basketball IQ along with his actual skill potential. He doesn’t have the defensive skill Josh Jackson possess although he is a 7’1″ PF/C that can stretch the floor on offense as he is capable of knocking down the outside shot as well as locating the open man on the floor with his passing and dribbling capabilities. If the Cavs were to change their mind and accept the trade, Dragan Bender can (with some development in his game) bring a different aspect of game to the Cavs as Tristian Thompson is more of a hustle player that will grab rebounds and keep the paint well protected therefore adding a Center with an opposite skill set can be beneficial for the Cavs’ bench. Of the trade offers the Cavs have received, this would be the most ideal for them. They replace Kyrie with another scoring guard, a young teenager that can be developed into an exceptional player especially with Lebron in the same locker room along with a first rounder which could help the Cavs however they choose to use that pick.

One-year player Dragan Bender is being included in trade talks between Phoenix and Cleveland for Kyrie Irving.

Other teams such as the Timberwolves, Spurs, Clippers, and Knicks have reportedly expressed their interest as well relaying offers of their own.

Just a few teams that have made an attempt to acquire Kyrie Irving from the Cavaliers.

Whoever the Cavs try to trade Kyrie to, it’s easy to expect them to take the shorter end of the stick. Although, it is better for the Cavs to trade Irving rather than him leave them hanging through free-agency. If the Cavs refuse to trade him, that is expected to happen unless Lebron leaves first during next year’s free-agency as many people around the league are foreseeing. Either way, the future’s looking dim for the Cavs after a 3-year-straight stint of reaching the NBA Finals.